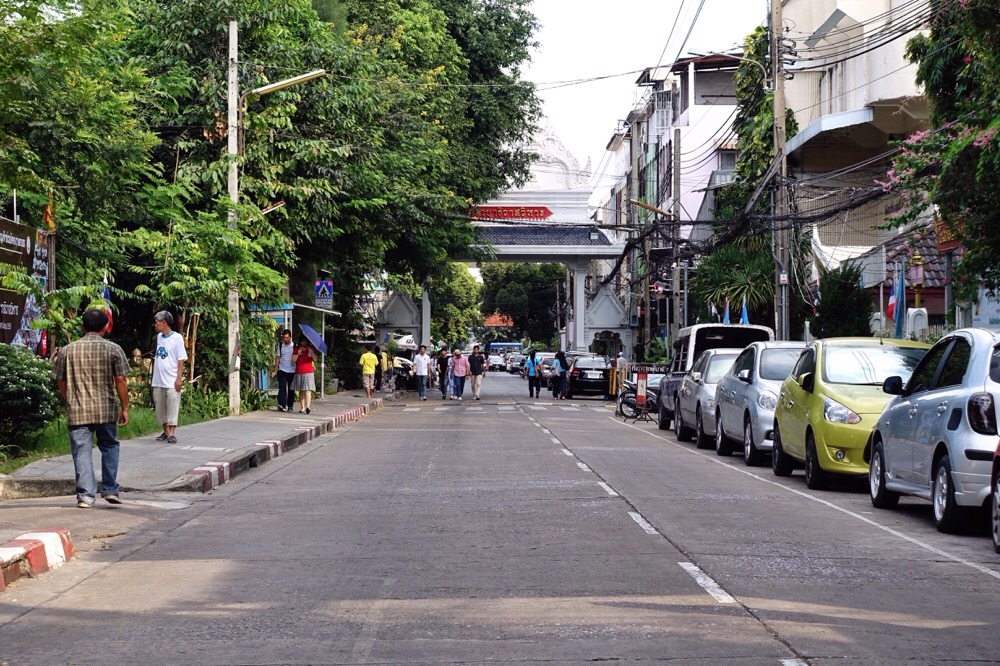 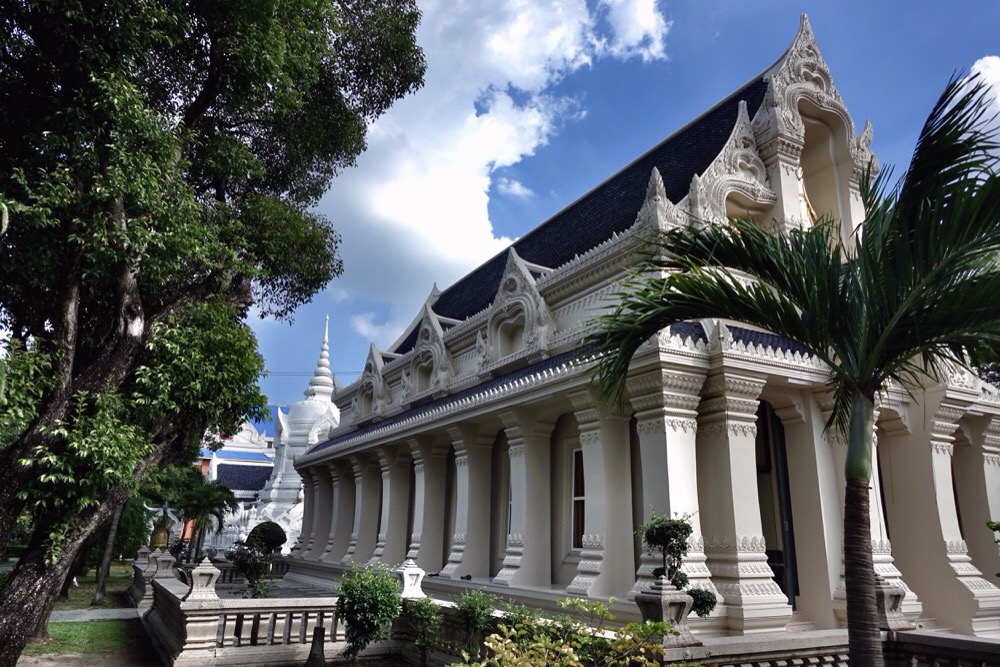 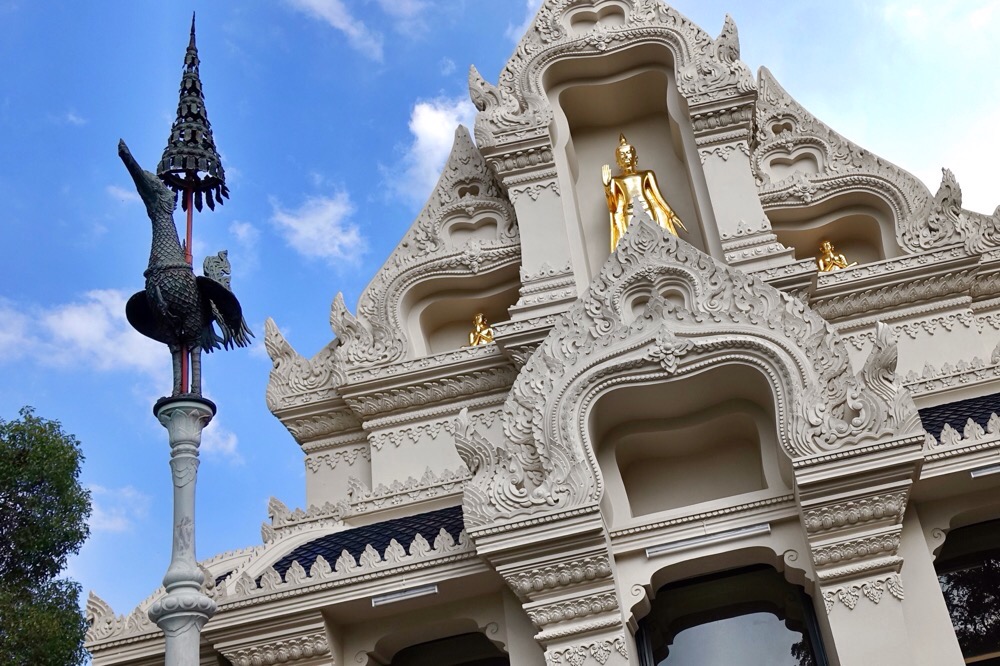 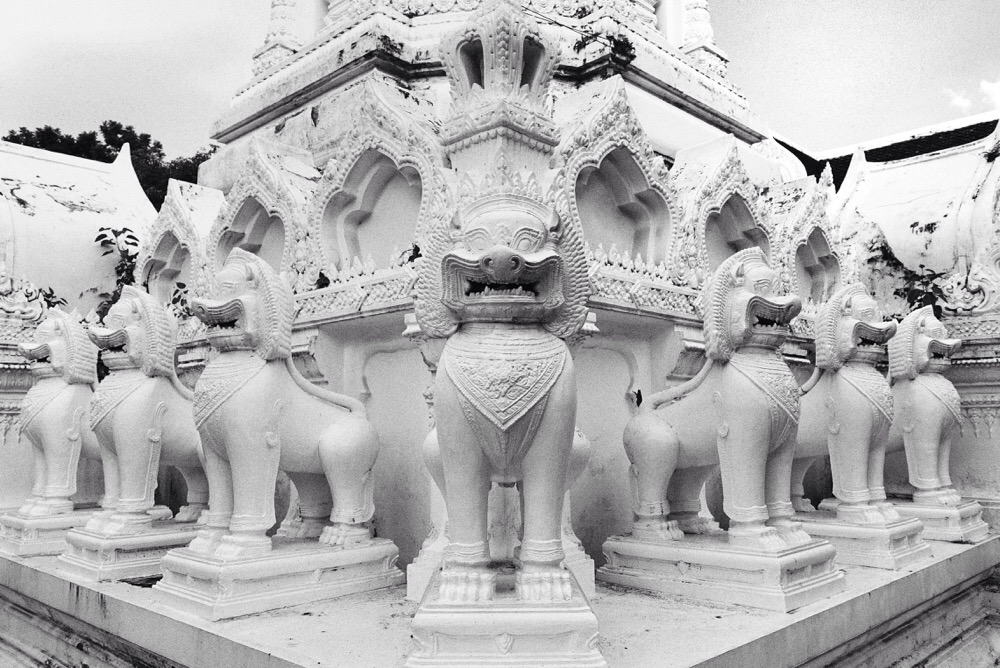 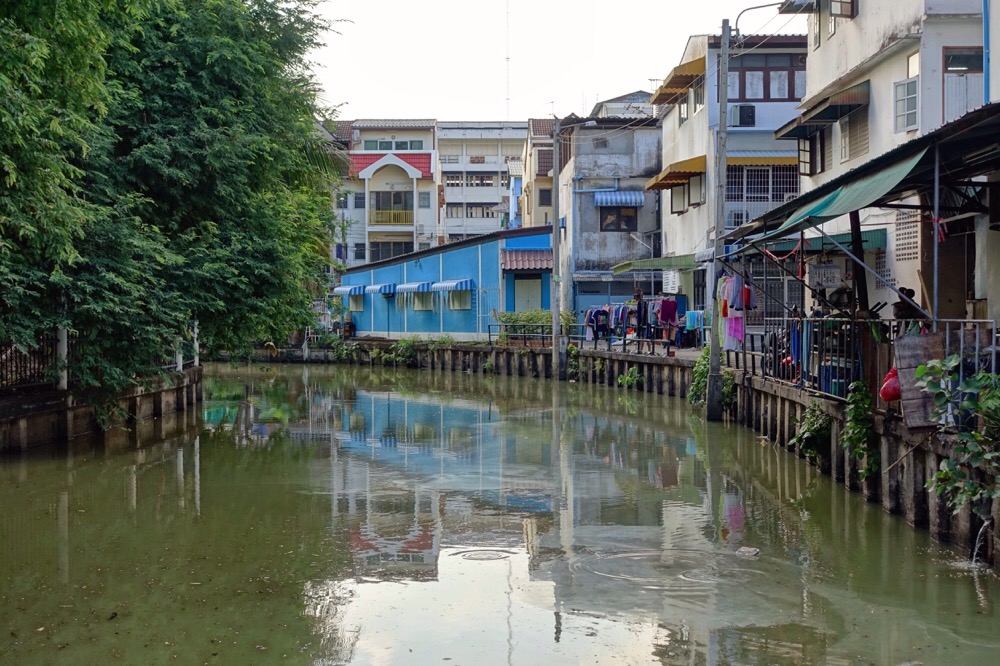 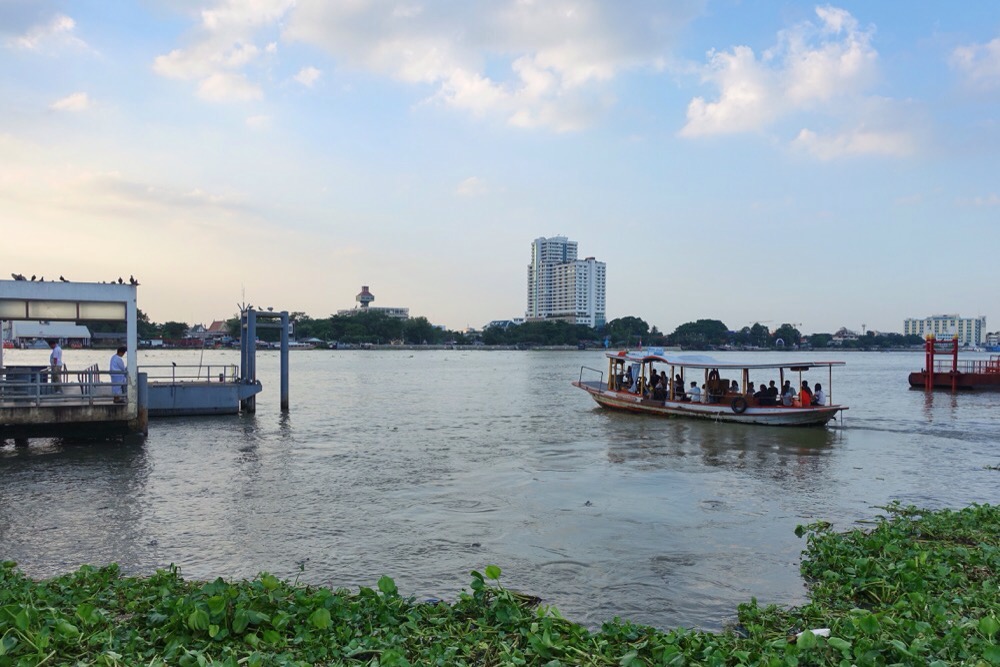 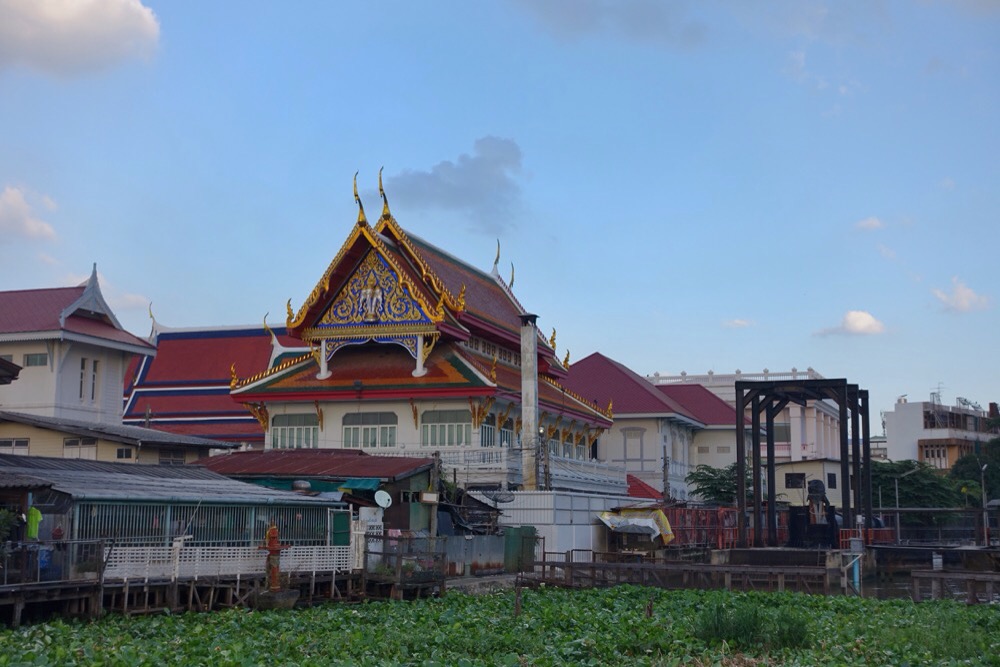 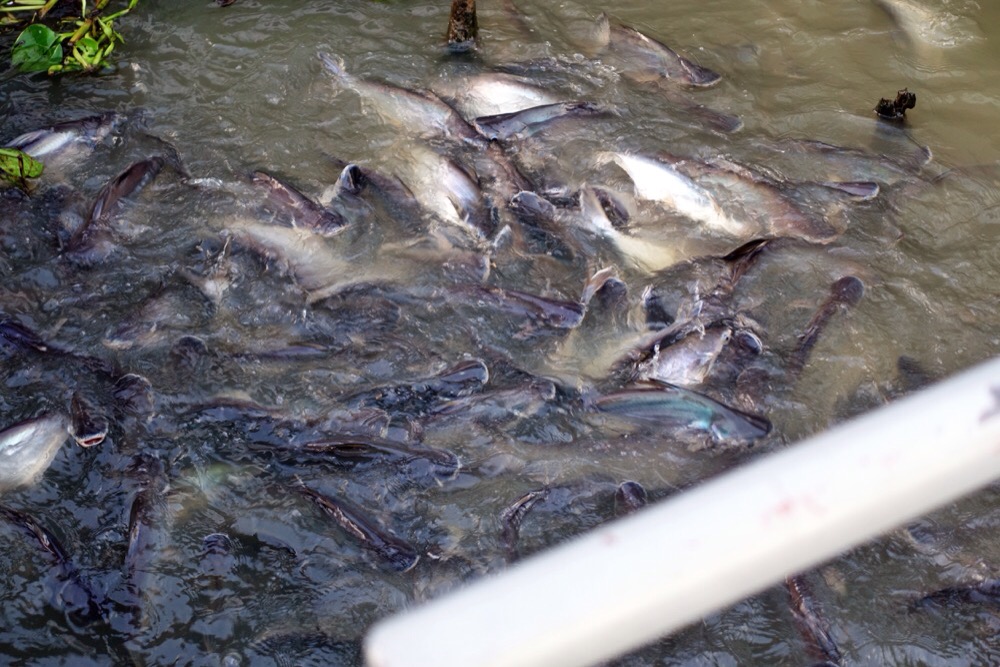 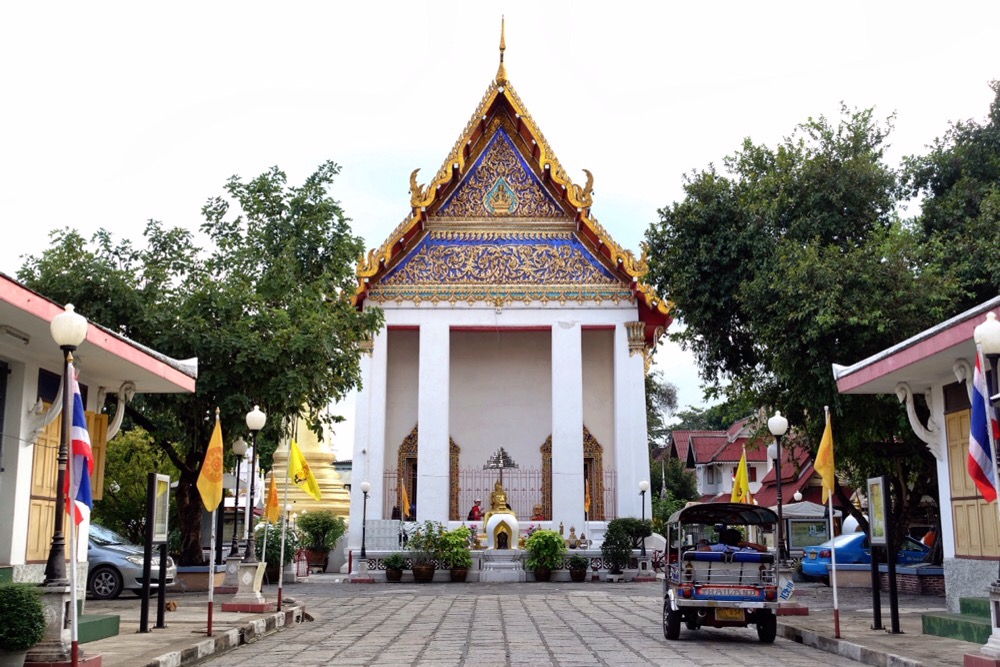 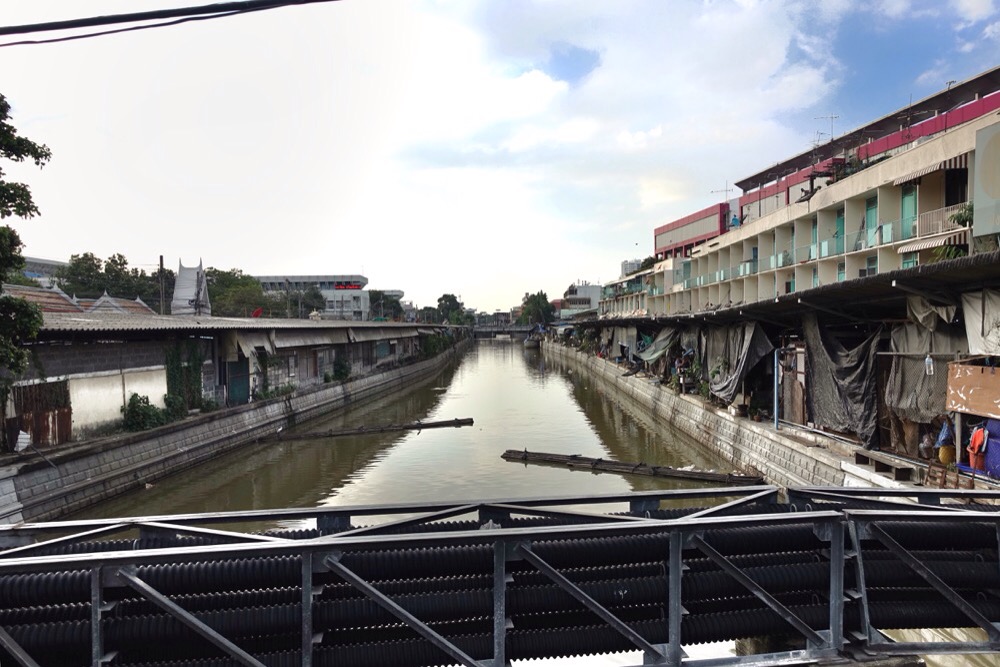 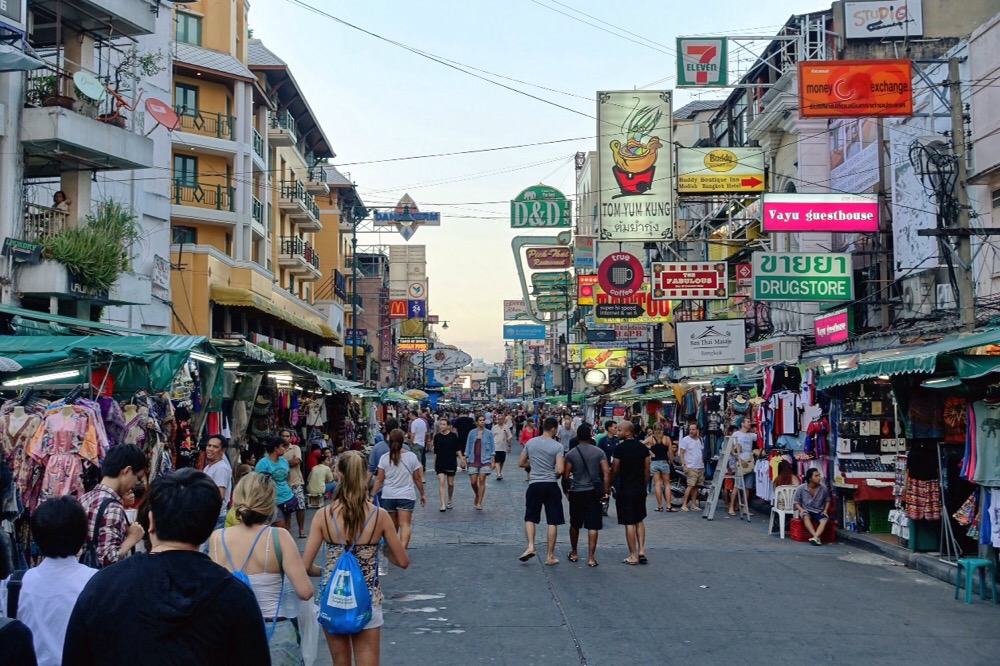 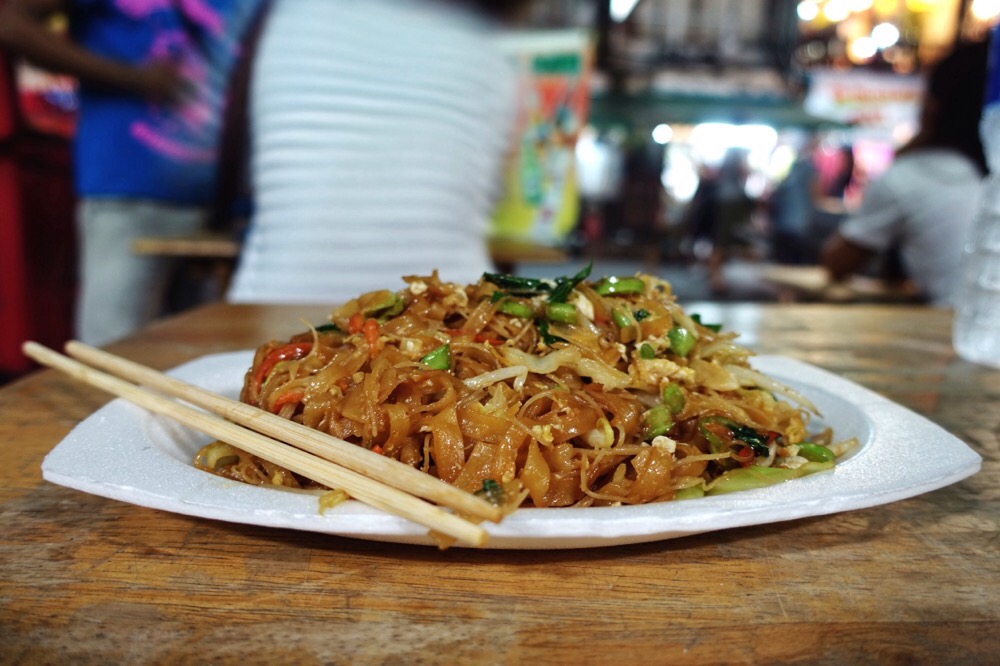 The smell of jet-lag is in the air but we were up and fresh to cease the day. We decide to walk to Khao San and see what all the fuss is about.

The walk is only about 3km but as we were walking shiny thing kept distracting us turning a ~30 minute walk into nothing short of a few hours. Despite this is was actually way worth it. We visited lonely temples, beautiful streets and after straying through a wooden-stepped tunnel we hit a river crossing. The scene was amazing. Waters in the bay were green with floating plant life and ferocious rippling as countless catfish (way too man for the space they were in) we’re attacking bread crusts a little Thai boy was throwing in. A boat came and picked up the people, the boy ran out of crusts and we continued to the famous Khao San Road.

Stark white rooftop needles grab our attention and again we’re sidetracked down another street where we find ourselves in the Buddhism Protection Centre of Thailand. White lion sculptures surround white buildings encasing golden statues that sit within a tranquil garden.

We carry along up a main road and come to an open gate this gate was big and it had a few guards so we did the tourist thing and gestured as best we could to one sitting down “can we go in and look around?”. When confusion left his face and the look of understanding stepped in, he shunned us in and carried on reading his newspaper.

We stumbled upon the floating palace, well, not quite — we still had to walk all the way down to the river. So we did, along the way seeing a two-foot reptilian beast, the largest I’ve seen in the wild, stare at us and scuttle away behind a fallen log. I wanted to get a photo but his stealth moves were next level.

We got to the end and saw the rooftops of what we assume was the floating palace, though there were guards with real guns this time and some chains set up around the viewing area so we turned around for the final leg of our journey to Khao San Road.

A couple more temples later (these things are everywhere), and we come to a bridge where we stand overlooking a modest river seeing first hand the rich/poor divide of Bangkok. It’s a view that evokes emotion. Not happiness, and perhaps not quite sadness — something more inquisitive. A why? A how? A hope for change that’ll never come?

To think if we simply got a taxi we would have missed all of this.

What a load of bollocks.

Okay, the Patthai noodles were pretty good. If you’re in the area it’s worth a look just because it is Khao San Road and it’s known — but if you miss it, you can find a strip just like it in every other country.