This is a walkthrough tutorial, with code examples on how to build this one-page website that you will be able to customise with a text-editor. I’ll also talk you through buying a domain name (http://example.com), web-hosting (where your website is stored), how to point yout domain to your web-host and upload your website.

I’ll make this as easy as I can and will assume you have no previous coding experience. You might want to bookmark this page because it’s quite long.

Before you start building your website, you should have a clear vision of what you want on your website and how you want it to look. You can sketch something on a napkin or make it pretty in Photoshop. Either way, it’s a lot harder without some direction.

END_OF_DOCUMENT_TOKEN_TO_BE_REPLACED 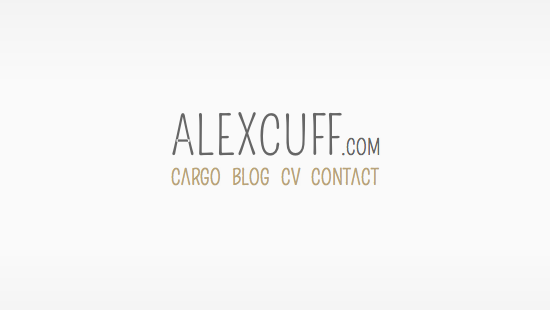 Today I built a simple, one page website for my friend Alex Cuff. Simple and beautiful. It uses CSS3 animation to fade in the title and the links and also features his latest tweet at the bottom.

The cool thing (and it’s the first time I’ve given this a try) is that it utilises responsive design. Mobile devices, or screen sizes under 1024 pixels wide, hides the latest tweet at the bottom of the page.

I’ve been shocking lately at the regularity of my blog posts. For that I apologise. Anyway, let’s crack on with this.

What’s new? Not much. I’m still a Creative Tech at RAPP and I still do stuff for the sake of doing stuff… which leads me to my next point, Style & Creativity.

END_OF_DOCUMENT_TOKEN_TO_BE_REPLACED

Woohoo, it’s about time I got something up on the main domain! I plan to fill it up with work so if someone visits https://marcusmichaels.com – it’s my portfolio and then that leads into the blog, rather than having a blog with some dog vomit as a main page.

Saying that though, it’s not dog vomit any more! Oh no. Now it’s a slightly more vain attempt of a landing page featuring myself as the background image… it wasn’t meant to be vain; just coincidence. I think I should probably remove the pictures of myself from the blog though – people might start talking.

Anyway, here’s the site, if you click on the picture you can visit it live, although it looks the same. 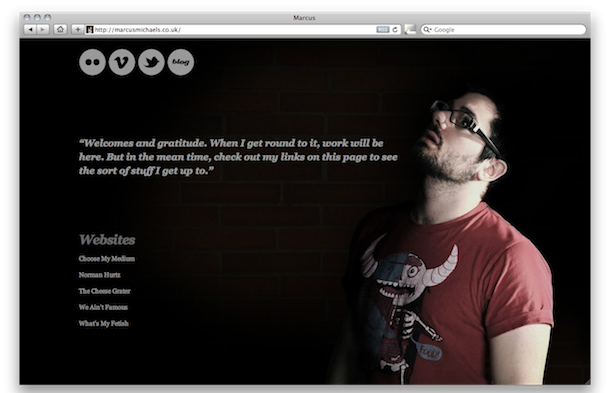 “Built while drunk, tweaked while hungover, finished before a shower.”

The website is now up and raring to go. The concept is simple – need to think of some mediums to advertise on? ChooseMyMedium.com randomises a growing list of media types from the usual suspects to something you probably haven’t even considered (which is the whole point of the website).

I kept it super simple and and it works sublime. Here’s a screenshot if you’re too lazy to visit the page: 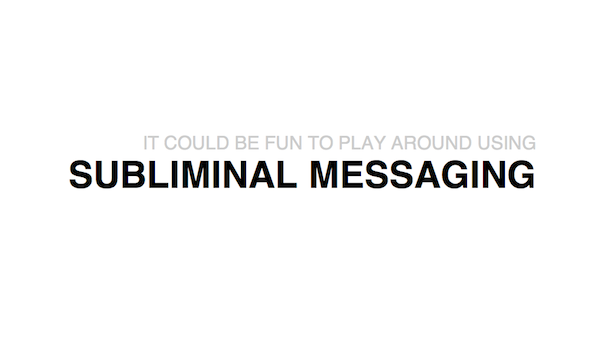 Shout out to @JPHubbard keeping me company over Skype during this.

I’ve got home, it’s late, i’m drunk and I’ve had this idea in my head all day so i’m sitting up at quarter to 4 in the morning busting out some codage on dreamweaver trying to get this to work. Luckily, it’s working, but unluckily, because the domain is so new and I’ve had to point the nameservers to a different host… I can only view the site with the site preview and nothing is technically live on the internet yet.

The idea behind this new (minimalist) website, is to help creatives come up with a starting point for a campaign by throwing something into the mix that they might not have thought of. Hopefully it’ll pick up, maybe it’ll flop. Either way, I think it’s cool and i’ll be using it.

When it’s all live and hunky dory flavoured crisps, i’ll bust it out on here so whoever reads my blog can check it out – it probably won’t be relevant if you’re not in advertising though.