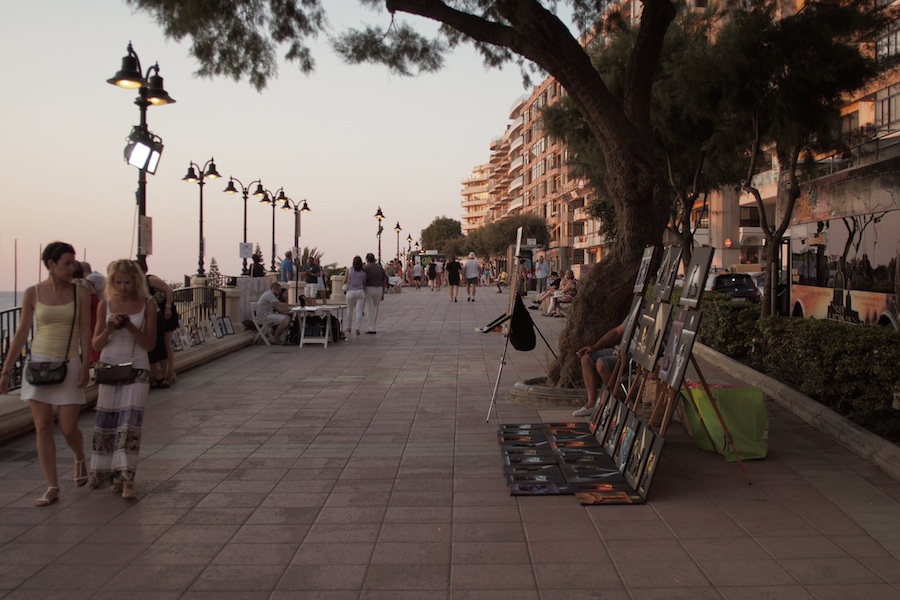 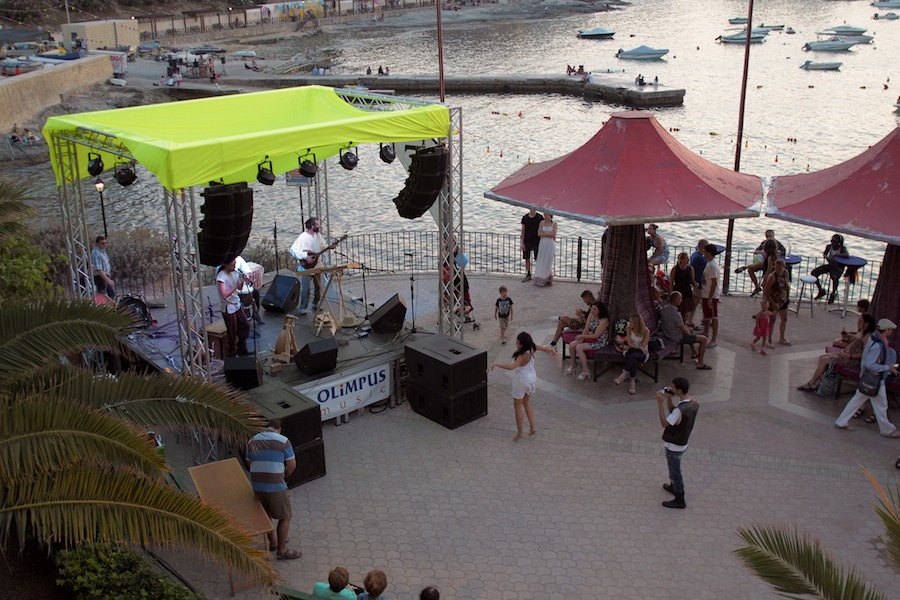 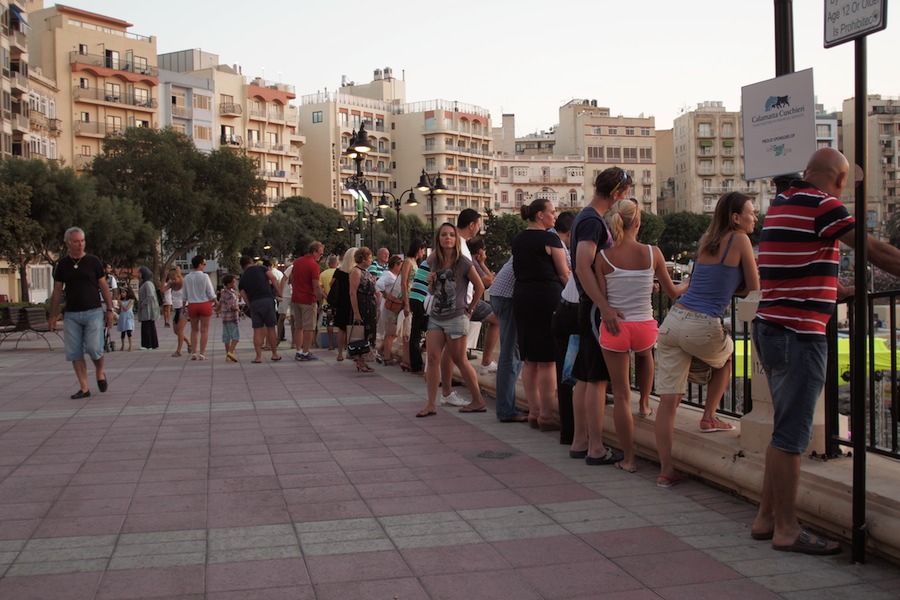 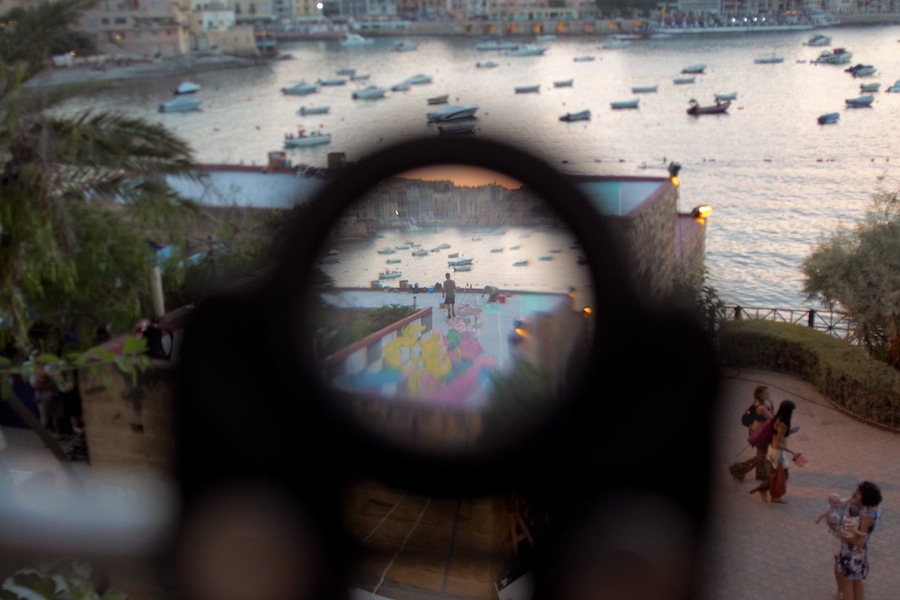 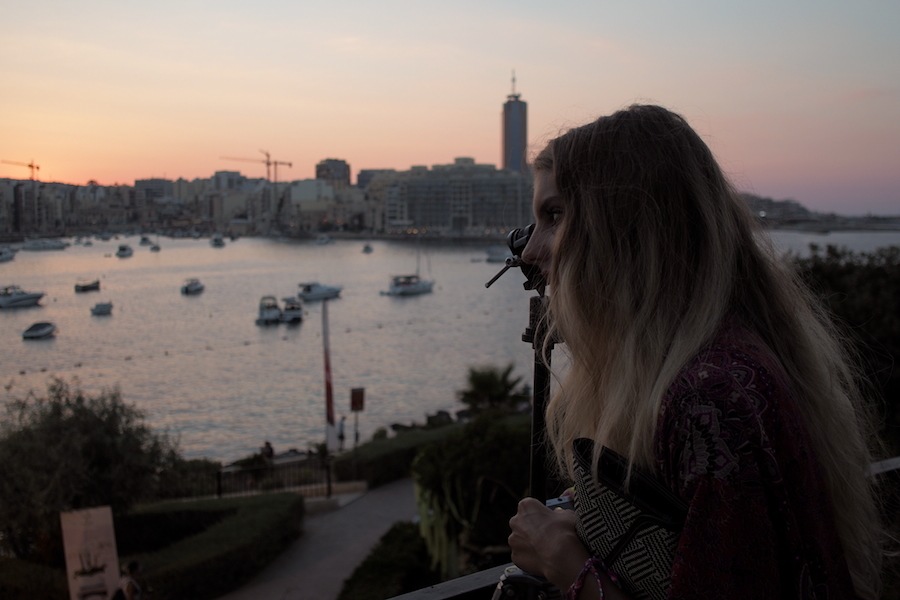 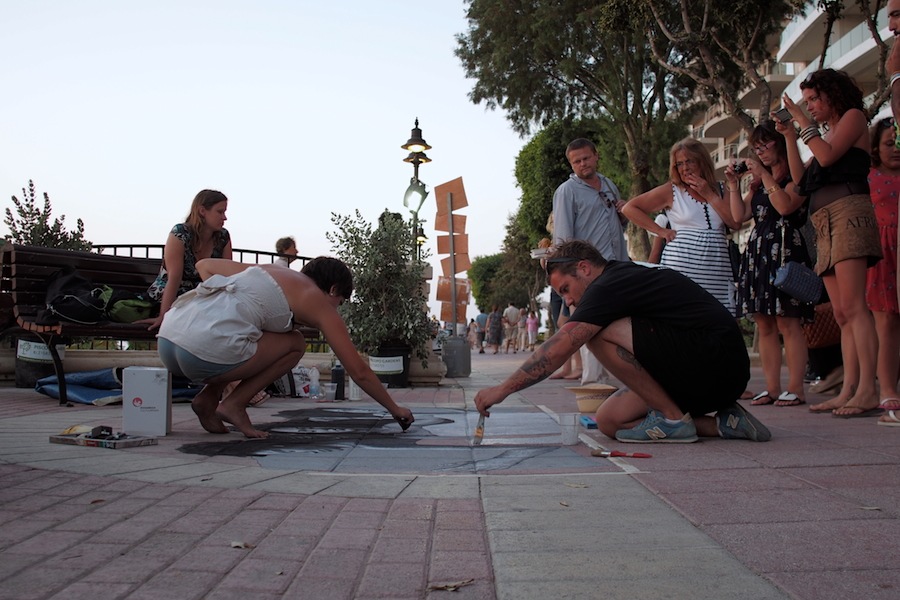 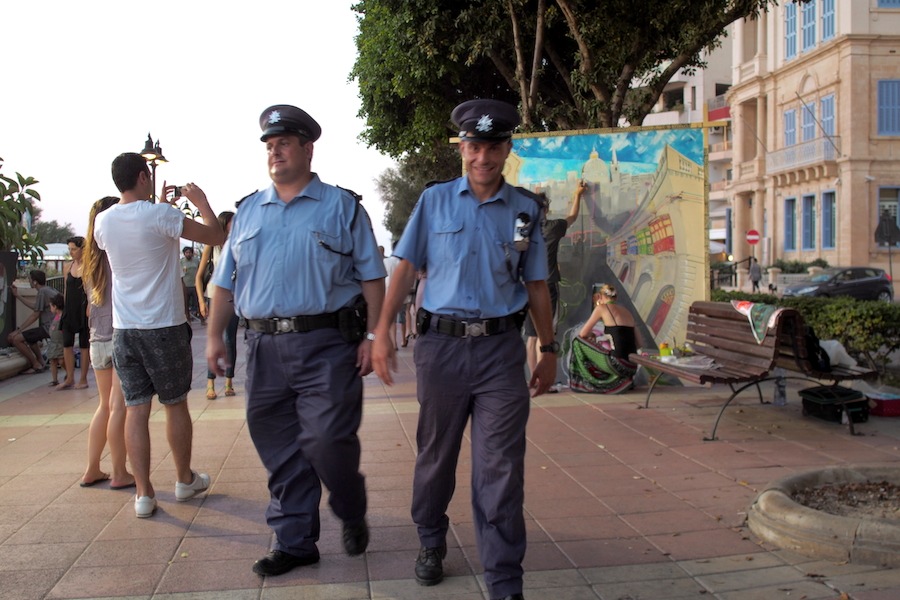 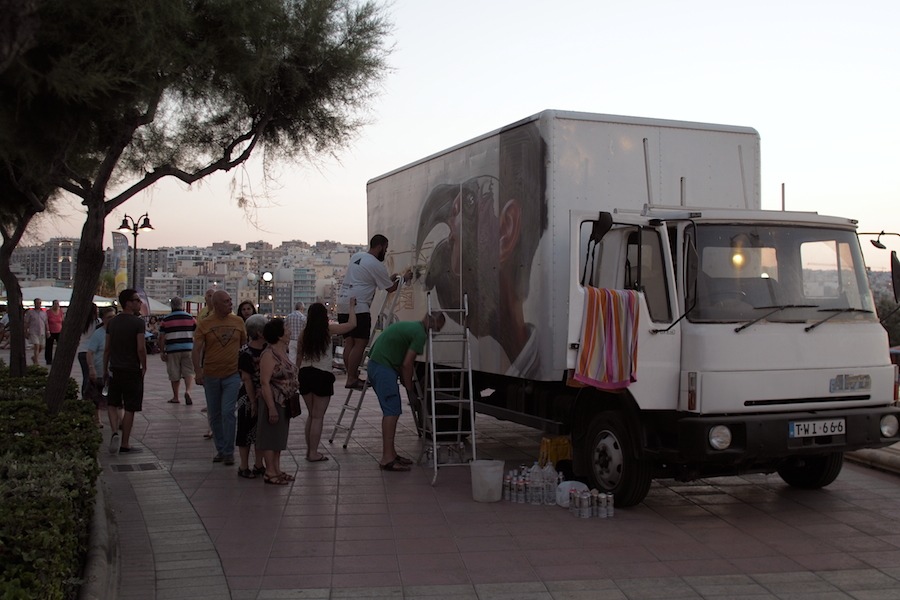 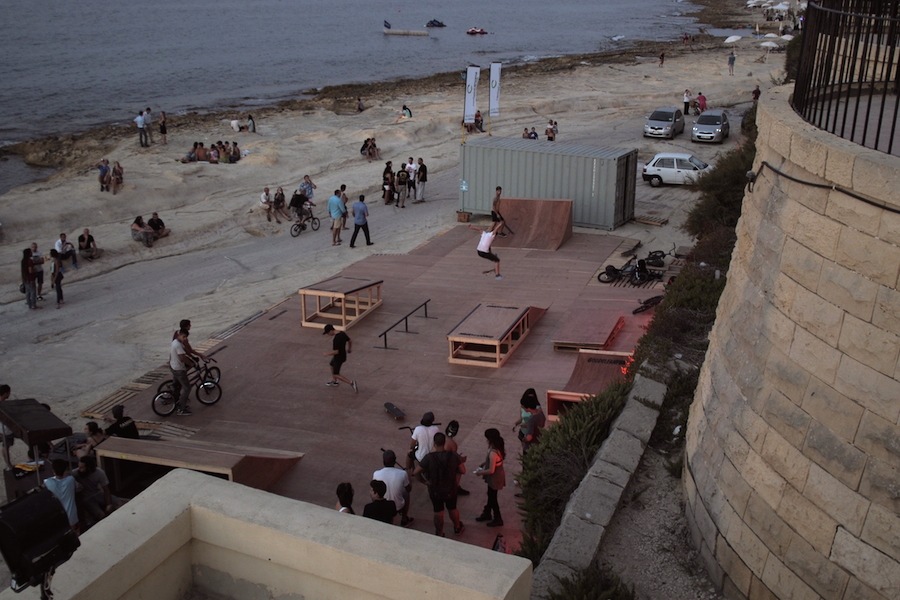 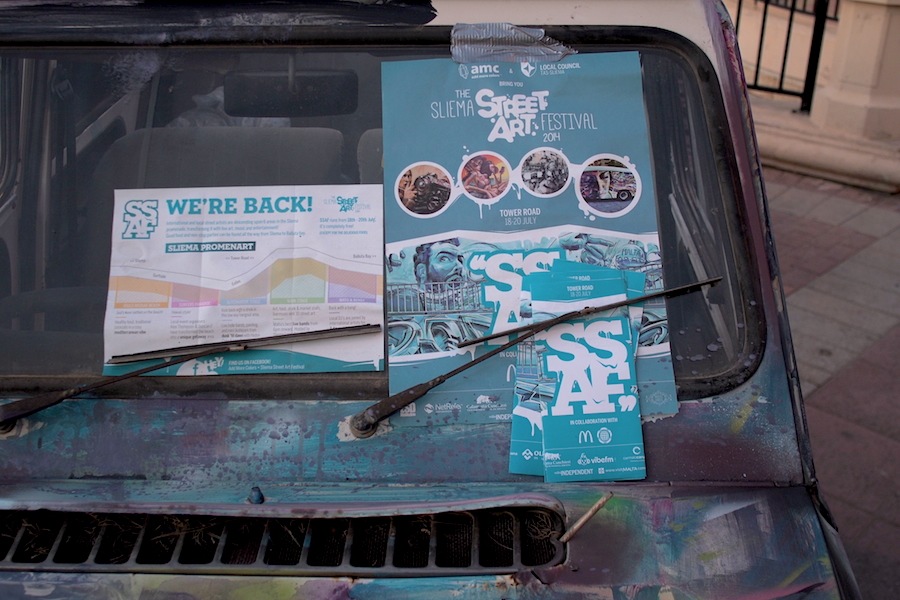 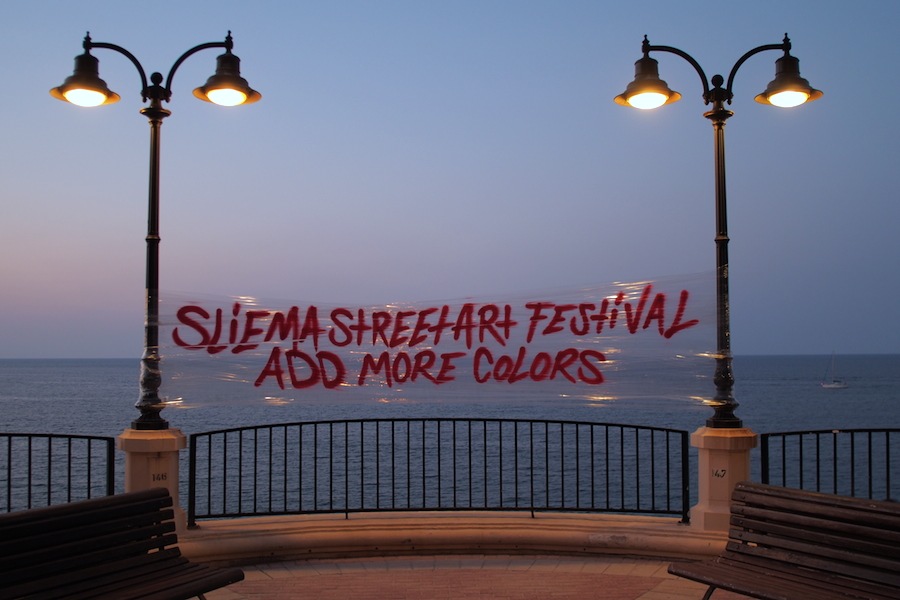 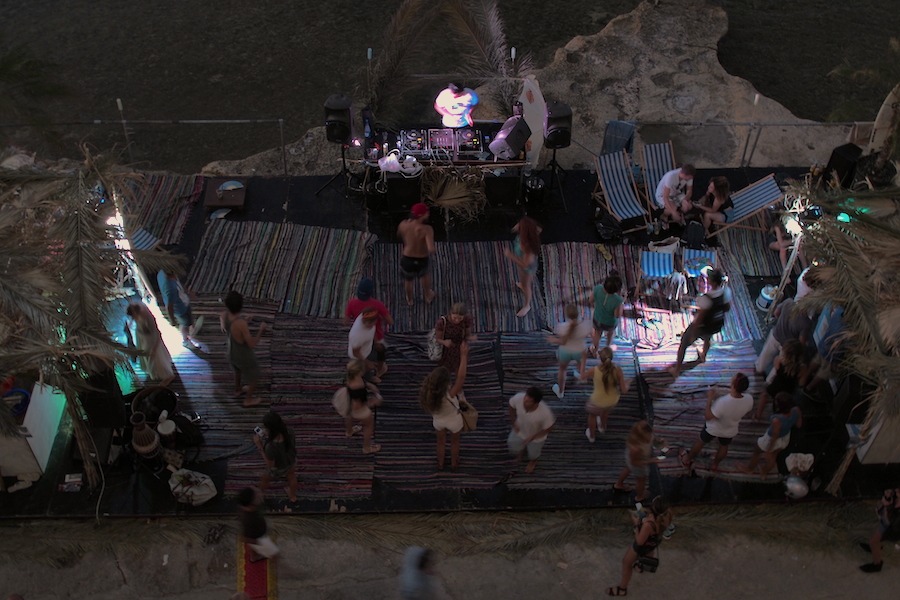 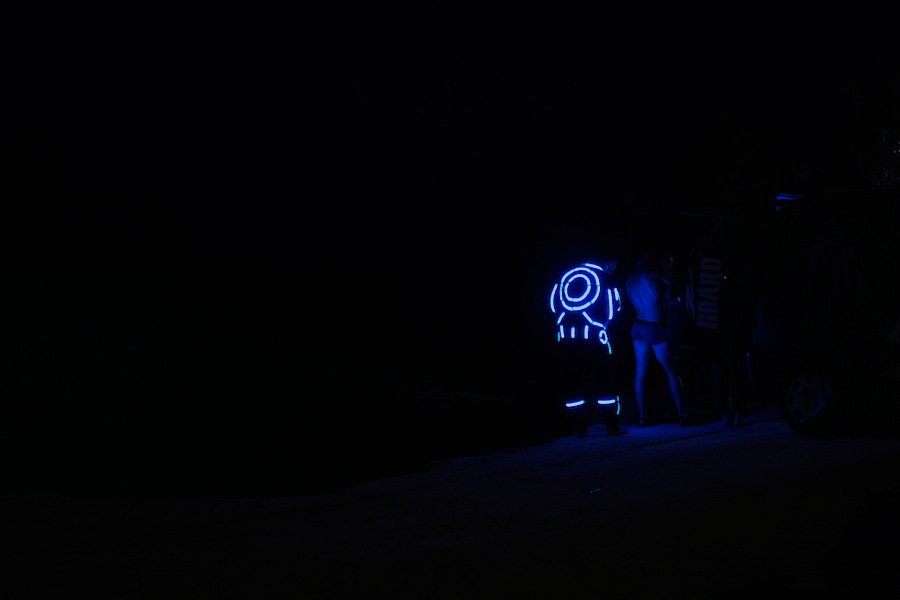 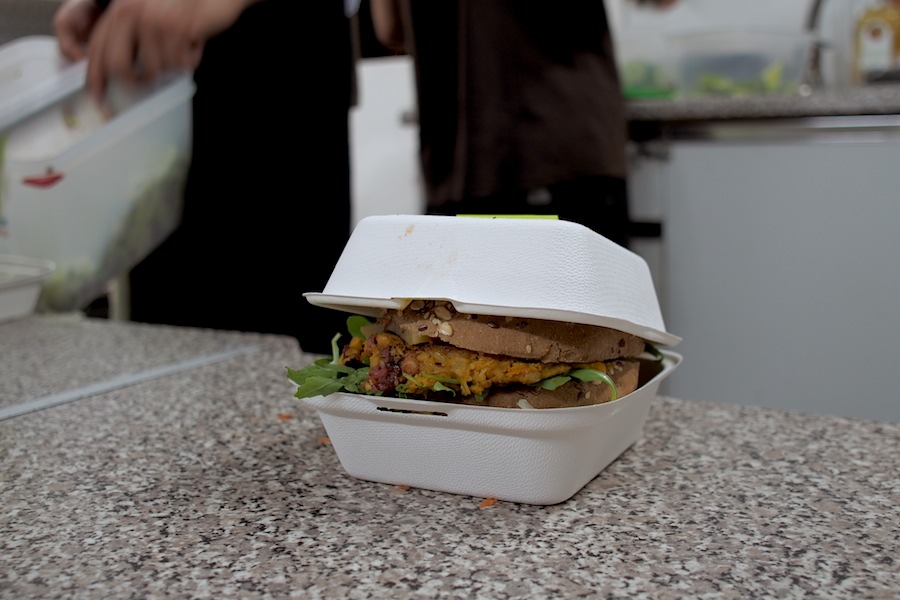 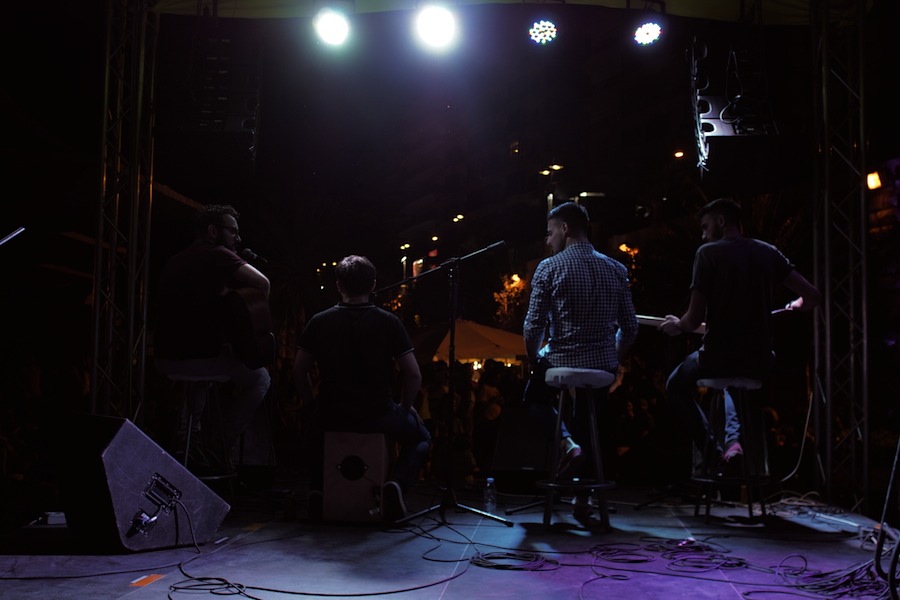 At the weekend, Sliema hosted its annual Street Art Festival. I went down with Charlotte, Steph and Yana to soak up the atmosphere and enjoy the art.

Sliema’s promenade is usually a nice place to be in the evening as everyone is out enjoying the food and drink. The festival just amplified that atmosphere. Stages were set up for live bands, singers and DJs, and walking down the beach front were artists spray painting cars and vans (with incredibly detailed artwork), live floor, roof, and wall paintings, some healthy and not-so healthy food stalls, beach parties, a temporary skatepark and small markets where art and crafts were being sold.

For dinner, Charlotte and I stopped by The Grassy Hopper’s Food Van. They offer a selection of vegetarian delights, we ordered the Spicy Chickpea Burger and the Beet n Bean Burger. I’m not usually one for vegetarian meals, especially burgers, but damn, it was so tasty and filling. They fried ’em up just like normal burgers, added the cheese and whatever else, stuck it in a fluffy wholewheat bun and served it on a bed of salad. Then we ate them on the beach.

To end the evening we went to get ice cream but the queue was huge, so we left it.

I filled the void with yogurt and honey when we got in.

What’s an Urchin even doing in the Sea? At first I was like, ow, and then I was like, oh man I gotta get those spikes out.

Whilst having a paddle along the seafront in Sliema, I had unknowingly (at least the first time) stepped on a sea urchin. I thought it was a sharp rock at first – one leg sharply raises, the other one sharply drops, that’s when I figured it out. Right heel, left toes. Impaled.

The general consensus on the internet is to remove all spikes (I think I still have one or two buried), soak the area in hot water or vinegar. I soaked in vinegar because apparently it dissolves the spikes left in. I’m not sure about this, but it stunk the place up. It’s like i’m living in a bag of Salt & Vinegar crisps.

I couldn’t sleep last night because I went on the internet to see what damage those cute little hell balls could really do. You know, some life preserving research.

I’m experiencing none of the symptoms and the areas didn’t and haven’t swell up, get red, go pussy or anything. Yet. But after reading about a guy in the exact same situation that just removed the spines and then a month later ended up paralysed from the waist down (which was the good outcome!), it kind of freaked me out. That and the stories from people say that their injury healed perfectly but then 3/4 weeks down the line there were complications. I don’t want any complications! How can a doctor even diagnose a future complication?!

There’s nothing I can do and that freaked me out. Today I’m a bit sore, but most likely that’s from me playing surgeon.

Let’s all take a minute to look at some of these creatures with a quick Google search.

Damn my will for seafaring adventure.

It’s been over two months since I threw caution to the wind, quit my job and set out to travel the world with Charlotte. Let me catch you up on the story so far and living in Malta.

Riki-Rewind back to May. It’s my last day at work (and coincidentally everyones first day in our new office), I handed in my equipment the previous week to the office move so with nothing to work with and everyone busy unpacking their stuff and settling in, I had the day to get tweaked on ‘Goodbye Coffees’, frolic around the new building (which btw was a fantastic upgrade to the previous office) and check out the area.

It was a good last day.

That evening I had strategically planned (after wrongly assuming my office was still going to be in King’s Cross…) a trip to Paris on the Eurostar. I figured if I’m going to leave work, I’m going to leave in style. Going from a full time job in London to being unemployed in Paris within the space of a few hours felt incredible. Charlotte and I were on our way to the world’s most romantic city.

We stayed for three days and walked EVERYWHERE. Like, 8-10 hours a day exploring kind of walking. It was great, but man, that’s too much. Still, we unintentionally saw all the main sites and had a Nutella crêpe by the Eiffel Tower. We loved every minute of it, even if we were staying in the sex district, a 5 minute walk from the Moulin Rouge.

The feeling of not having to go back to the UK was a feeling of freedom. There was nothing stopping us from carrying on round Europe, but alas, we headed back to the UK, stocked up on chocolate that didn’t make it past the border… because we ate it. All of it.

A few weeks pass, we bought a one-way ticked to Malta and we’re packing only hand luggage for a three month stay. We figured just taking hand luggage would be good practice for backpacking South East Asia. And it was. Most of the stuff I thought I’d need I haven’t touched, so that’s good to know.

I have a Brother living with his girlfriend, Yana, in Malta. They’ve been enjoying our company for about a month now and I got to say, Malta is an amazing place and for short holidays from the UK, return flights for under £100 per person is a no brainer.

An all day bus-pass here is €1.50 and I recommend going to Valetta – Malta’s capital city and Mdina – Malta’s old capital (walled) city which has a population of less than 300 people and they put rubber horse shoes on their horses to reduce noise. While in Mdina, have lunch Fontanella, their cakes are as good as the view.

So anyway, in Malta we were going to spend time preparing for our travels and sorting stuff out, though we haven’t really planned anything yet, I’ve definitely ticked some things off my list:

And that’s all taken place in Malta within the space of a month when I’m not at the beach – there’s something to be said for having time to do things.

And that brings us up to now.

I’m still looking for potential revenue streams so I can become location-independent, being a designer/developer is a good start due to only needing a laptop, prime for remote work.

Being ‘always on’ is taking its toll though, so I’m probably going to take a week off from the internet soon which I’m definitely going to blog about.

I’d love to hear comments about what you want to hear more of – my travels, making money travelling, the geeky bits – let me know below, yo!